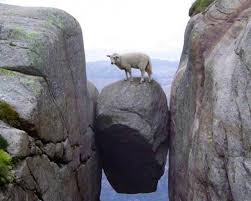 The multitudes of Israelites made their way through the wildness as they headed to worship their God. These former slaves who had never walked with their heads up, now for the first time walk as free, healthy and blessed people. In a matter of hours their world had been totally turned right side up as the God of their fathers delivered them through signs and wonders at the hands of Moses. Words can’t express the feelings of gratitude that these mothers, fathers and children were experiencing as they made their way through the wilderness to give glory and worship to their God.

But then, we see God instructs Moses in Ex.14:1-2, to turn the Israelites and have them “camp before Pi Hahiroth, between Migdol and the sea”. In effect the children of Israel were asked to backtrack and go back in the same direction that

Being in a tight spot without Christ leads to failure, but if we have Christ, there will be deliverance and victory   (tweet)

they had just traveled. Their path would take them in a direction placing them with the Red Sea on one side, and the wilderness and mountains on the other sides. In other words they were going to be in a predicament. This new encampment would put them in a less than vulnerable place before the enemy who was now pursuing them. The children of God were now between a rock and a hard place. What was God up to anyway?

Before these once shackled ex-slaves could even begin to enjoy their freedom, the dust from Pharaohs six hundred chariots and horsemen gave signal of their change of mind and fast arrival to kill and destroy them.(Vs.7-9) In Ex.14:10 it says that God’s children became greatly afraid when they saw the coming Egyptian army.

Maybe the complaints and murmuring of the Israelites were true, that there wasn’t enough graves in Egypt, so Moses brought them to the wilderness to die (Vs.11-15) or was God up to something? It says in Ex 14:4 that God said, “I will gain honor over Pharaoh … that the Egyptians may know that I am the Lord.” We see that

At the Red Sea God would use the vessel of deliverance for his children to also destroy the Egyptian army.    (tweet)

God planned to show that He was God almighty not only to His covenant people but to their enemies also. God had set up this whole scenario for His purposes!

Moses encouraged the people in vs. 13-14 saying, “Do not be afraid. Stand still, and see the salvation of the Lord”. He goes on to say that after God fights for them that they will never see this enemy again.

Even with the hopeless circumstances to the natural eye, God’s word was to “go forward”! But how could they? The impassable Red Sea was there, and this was way before the story of Peter walking on the water. God had it all planned out and would use the vessel of deliverance for his children to also destroy the Egyptian army. It wasn’t just a good Hollywood movie; God really opened the Red Sea for those he called out of bondage to walk across.

Being in a tight spot without Christ leads to great failure, but when we have Christ, there will always be deliverance and victory. When we are between the “Rock” who is Christ Jesus (1Cor 10:4, Deut. 32:4) and a hard place we will always have the victory! In Ps 60:12 it says, “Through God we will do valiantly, For it is He who shall tread down our enemies.”

What ever you’re facing? Remember, God often seems to place His children in positions of profound difficulty and hopelessness for a bigger plan. Keep going forward and let God fight for you and show you His power of deliverance.