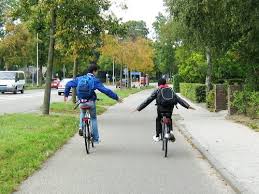 When I was in Junior High my brother and I were riding our bikes on a hot August evening through a section of our small farming community when a neighborhood “Bully” came riding up between us yelling, “Do You know who I am?”. The question he was asking was not a wrong question but his arrogant and blunt manner of how he was asking it was definitely out of place. At the time my brother and I were confused and not sure what we had done to stir this assault with words and anger. Thinking back, I guess we must not have had permission to go through his turf. He must have been a self appointed kingpin of that block. Yet in an uncommon fashion and complete unison we decided to just ignored him and keep riding along our journey.

Honestly, when I think of that event it still brings a smile to my face and makes me chuckle. But in a more serious note it also reminds me of how the devil, the enemy of our souls, comes to us often and arrogantly tries to intimidate us and convince us he is in control.

In 1 Peter 5:8, we read Peter’s exhortation to Jewish believers, “Be sober, be vigilant; because your adversary the devil walks about like a roaring lion, seeking whom he may devour”. The devil has no other thought than to accuse you and destroy you. Stopping you from fulfilling your God given purpose. The enemy does that through stealing, killing and destroying in your lives. (Jn. 10:10) He is a master intimidator and manipulator, an transform himself as a angel of light” as it says in 2 Cor 11:14. He looks and waits for you to leave the gate open in the fields of your life.

The devil has no other thought than to accuse you and destroy you, stopping you from fulfilling your God given purpose.

In other words the devil is a squatter, which is a person that unlawfully occupies land or a building making and saying it is their own. The devil is a self appointed kingpin and can only overpower you by deceiving believers.

In the same manner that the neighborhood bully tried to intimidate my brother and I with the words, “do you know who I am”, the enemy is also doing the same to many immature Christians. Paul declares he wasn’t ignorant of satan’s devices, desiring to take advantage of God’s people. (2 Cor 2:11) There’s to many Christian that don’t know who they are, therefore, the enemy pushes them around!

In all reality my brother and I should have said to the bully in our past, as well as, every believer should say when the enemy comes knocking is… “Do you know who we are?”. Instead of cowering to the intimidation of the enemy we need to stand

We have the privilege of being in the family of God. You are now a child of the King.

in confidence of our identity in Christ. We are children of the most high. We should be quick to announce to the enemy “You are messing with the wrong person! We are a kings kid”.

In Gal 4:4-7 we read, “God sent forth His Son … that we might receive the adoption as sons… Therefore you are no longer a slave but a son, and if a son, then an heir of God through Christ.” Through our receiving of Jesus being the Son of God we are adopted into being His sons and daughters. We now have the birthright of His bloodline. That’s what it means to be an heir! A person legally entitled to inherit and continuing the legacy of a predecessor. We have the privilege of being in the family of God. You are now a child of the King.